The XL American Bully is a happy, outgoing, stable and confident dog.  It goes by many other names as well.

These dogs are gentle and loving toward people. Good-natured, amusing, extremely loyal and a very affectionate family pet. Mostly always obedient,  He/she is an extremely courageous and intelligent guard dog that is very full of life. This breed possesses the loyalty and stability of the American Pit Bull Terrier while retaining the sociable, amiable, and outgoing temperament of the American Staffordshire Terrier. This unique breed is noted for displaying extreme tolerance with children and an overwhelming eagerness to please its family. Confident, yet not aggressive, this breed possesses a very pleasant temperament.

Description of the Xl American Bully

Size of the Xl American Bully

Weight and height of this breed varies greatly and are not considered important, however correct proportion of weight to height is very important to most breedings

Colors of the Xl American Bully 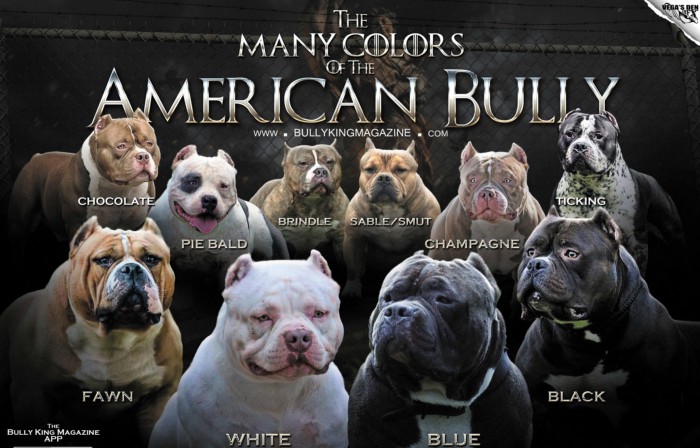 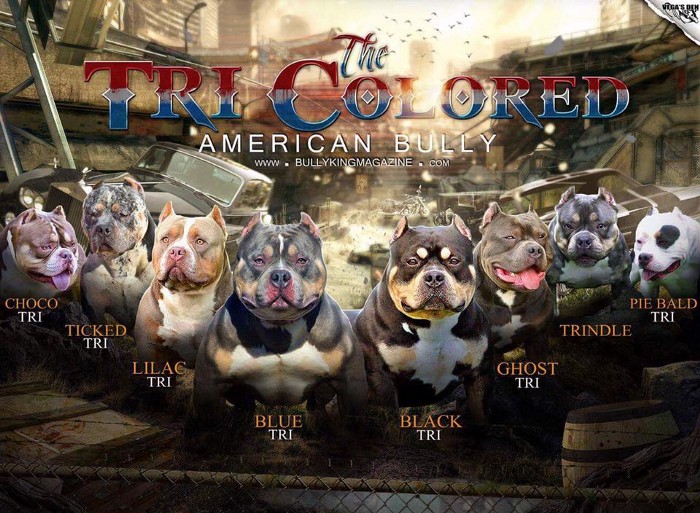 
All colors and patterns of the american bully that are accepted are Fawn, Brindle, Striped which is non brindle, solid color or sometimes solid combined with white, you have tri color XL American Bullies. Although very rare you also have White Rhino which is known as Albinism.

as I dont know much about Albinism. I found this info on the web

"One of the rarest colors for the American Bully are the Albinos. Oftentimes, white bullies are misclassified as Albino. To be officially classified as an albino, an American Bully must lack the genes needed to produce melanin, which most often occurs when two copies of a recessive gene are bred. Albinism is a genetic condition in which the pigment of the coat, eyes, and skin is completely absent. For bullies, the pink of their eyes, skin, nose and the areas surrounding their eyes and mouth will look very pale, even seemed bleached. An Albino bully’s eyes may contain some minor pigmentation, but will be pale or translucent. The Albino American Bully is known as a ‘White Rhino’, and is considered the most expensive. Their lack of melanin in the skin puts these bullies at higher risk for sunburn and for developing skin cancers."

The head of the American Bully is something a lot of breeders love to measure, the largest size I have heard of so far is 31" inches that was from a dog called Probulls Sinister.

Origins of the Xl American Bully

AMERICAN BULLY HISTORY The American Bully was developed in the mid 1990’s by breeders on both the East and West coasts of the United States. They used, as their foundation stock, United Kennel Club (UKC) and American Dog Breeders (ADBA) registered American Pit Bull Terriers mated with American Kennel Club (AKC) registered American Staffordshire Terriers; different varieties of the same breed based on bloodline history. These dogs were first known as “bully type” American Pit Bull Terriers. For the past 25 years, these dogs have been bred, bloodlines refined, and promoted across the U.S and overseas. The breeders of these dogs have developed this breed for a specific build and temperament so unique that they have been recognized as a breed separate from the American Pit Bull Terrier. These dogs were first registered as the American Bully with their own kennel club in 2004. Recent speculation that the breed was influenced by the blending of other bull breeds into their gene pool prompted the UKC to recognize the American Bully as a separate breed on July 15, 2013. Beginning in March 2015, dogs exhibiting these physical characteristics unique to the American Bully breed, or being bred from brood stock that consistently produce dogs with these unique physical characteristics, are being registered with the American Dog Breeders Association Inc. as the American Bully.
source: https://adbadog.com/american-bully-conformation-standard/

The XL American Bully is a variety of the American Bully: a designer breed that only has been recognised as its own separate breed by the United Kennel Club in 2013. Their history dates back no more than a few decades: In the 1980s and 90s, dedicated breeders in the US set out to create a perfect family companion. For that purpose, they crossed an American Staffordshire Terrier with an American Pitbull Terrier. From that first litter, they developed the new breed further into the American Bully that we have today.

Classic same size as the Standard with a lighter frame

XL American Bullies, much larger of standard, males height between 20 to 23 inches and  females between 19 to 22 inches

Pockets these are the smallest of the 4.

Pocket American Bullies, measure between 14 and 17 inches in height